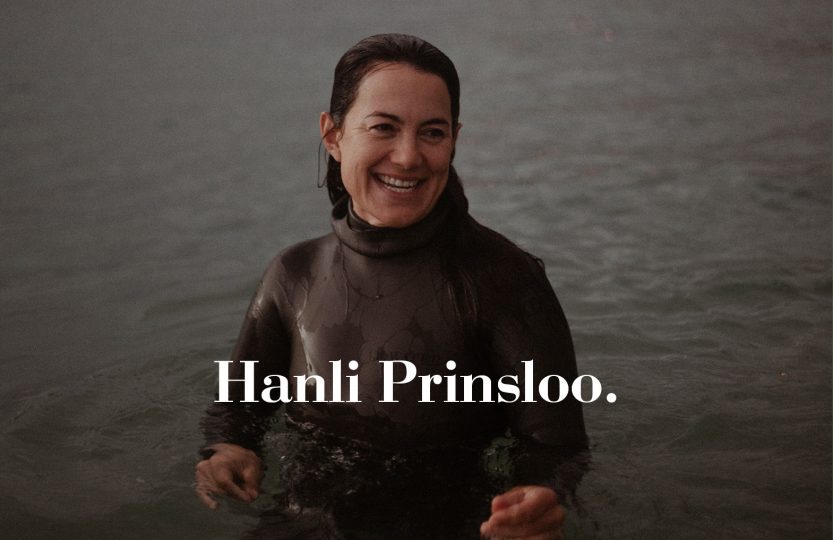 If Hanli Prinsloo dived from the rocks wearing her customary long-blade fins and blue close-fitting neoprene a few thousand years ago, ancient mariners would have living proof of mermaids. They would see a dark-haired siren, beautiful, lythe and who in a nano second was gone from their sight, leaving only a ripple in her wake. And they would wait. It might be as much as six minutes before she playfully surfaced and by then, convinced she was half fish, half woman, they would be bewitched. As we are today for other reasons by this formidable woman.

For 20 years, Hanlie has free dived, training her body to fight the impulse to breathe at depths of up to 64 metres.

The answer to why she does it, is not what you might hear from many professional sportsmen and women who run solo across a desert, climb Everest with no oxygen, or walk a tightrope over a 450 m canyon. Extreme sports can often be solitary pursuits perhaps to conquer fear, create a super-human brand or for the thrill, the showmanship, the dare.

For Hanli, it is different, and she shares this with a handful of men and women who push their personal limits for a greater cause.

She is an ocean conservationist and dives underwater to make a critical and remarkable connection with aquatic wildlife, draw our attention to the fragility of our blue planet.

In one blog she says ‘How long do you need to be down for an oceanic manta ray in Ecuador to start accepting your presence? How many turns and twirls and shimmies before a dolphin wants to play at depth?’ These are questions only she can answer and is what draws audience after audience to her inspirational talks.

And then there are sharks, and the primordial fear we have of them. The odds are astronomical. Years after Jaws became a blockbuster, author Peter Benchley expressed his deep regret at how sharks were portrayed largely as a result of the movie. Today between 50 and 100 million of them killed every year. ‘No-one appreciates how vulnerable they are to destruction,’ says Benchley.

Hanli writes about her dive off Aliwel Shoal on the East Coast of South Africa: ‘I took a final big breath and kicked down, hanging suspended at depth I waited and watched, when suddenly there she was. Seven meters of pure muscle, graphic stripes running down her sides and a square jaw. A large tiger shark. With slow swishes of her long tail fin she slowly cruised over…’

Hanli becomes our braver alter ego as she comes face to face with the ocean’s most successful predators but as she writes about the experience, and the shark’s calm curiosity, we feel the first signs of unease. It is the creature who is at risk, not us. We continue to misread behaviour and it is the Hanli’s of our world who strive to correct our course.

From a young girl who swam with her sister on their farm dam and played at being mermaids, she left for Sweden after school and grew to love the sport of free diving. Today, she has become an aqua-ambassador of the deep with her I AM WATER Foundation, and has been selected as one of the World Economic Forum’s Young Global Leaders.

‘Freediving is so much more than a sport, she told journalist Martinique Stilwell, ‘it is a lifestyle – an approach to living on this planet.’

Fifty years ago, scientists believed the human body could not survive a dive beyond 48 metres. Hanli regularly dives deeper but it is not a race to the bottom for her. It is a journey to bring two worlds together.

The ancient sailors may have been right. There is something tempting about a ‘lady of the sea’ and slipping into the magical world she can share with marine creatures. It just takes that first deep breath…