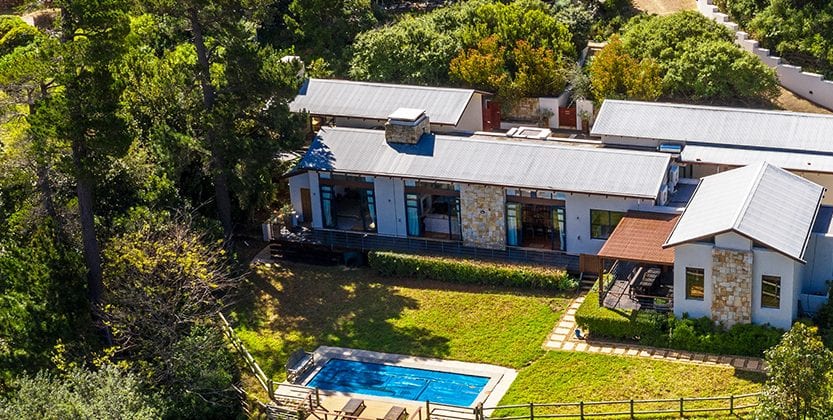 Just over 22% of all properties in Hout Bay are located in lifestyle estates, and most of these are nestled on mountain slopes.

Secure living is top of mind for homeowners in estates, but in Hout Bay this safety comes with the added bonus of superlative views and convenient access to the CBD and Southern Suburbs.

“There has been a significant increase in the demand for homes in secure estates, and Hout Bay offers a range of options for buyers wanting the tranquility that one associates with this fishing village,” says Shelly Keys, Pam Golding Properties area manager for the South Peninsula and Hout Bay. “Hout Bay really has something for everyone, with its equestrian facilities, sandy beaches and natural beauty.” More than 30 years ago, residents proclaimed the area the “Republic of Hout Bay” to distinguish themselves from the rest of the peninsula. This pride in being an exclusive community with its own identity persists today.

One of the most prestigious estates in Hout Bay is Ruyteplaats Private Mountain Estate, nestled on the southern slopes of Table Mountain towards Llandudno. Set on 34 hectares of indigenous flora, the estate abounds with natural beauty. It is also one of the few estates in Hout Bay that offers a combination of freehold and sectional title living. Half of Ruyteplaats is made up of gardens and green spaces, and residents also have access to the trails and forests on the mountain. There is also a tennis court for all to enjoy.

In 2018, the median price of a home on this estate was R10.995 million, while one of the sectional title units or lodges sold for a median price of R4.5 million. More than half of the homeowners have lived in their properties for 11 years or more, according to property data. But younger buyers are seeing the value of living in one of Hout Bay’s sought-after lifestyle estates, and a third of all recent buyers were between the ages of 18 and 35 years. A further 33% of recent buyers were between the ages of 36 and 49, which suggests that the appeal of a secure estate, as well as the excellent choice of schools in Hout Bay, has made this estate especially popular with families, says Claudia Silva, Pam Golding Properties agent for Hout Bay.

The vista of the ocean and surrounding mountains is really the focal point of Ruyteplaats, and homes are designed to ensure that the enviable views take centre stage. A property in Constant Close, marketed by Pam Golding Properties for R17. 995 million, boasts a double-volume entrance hall with a skylight to make the most of the breathtaking surroundings. The master bedroom also has a 360-degree-view deck. Natural light dominates this expansive home that is warm and inviting, as well as elegant and luxurious. The reception areas open onto an expansive deck, with panoramic sea and mountain views.

Kenrock Country Estate, located near the World of Birds, is a low-density eco-estate that comprises six dams and indigenous flora. There are also 13 hectares of open land for residents to enjoy. Home ownership is fairly stable, with 44% having lived in their homes for 11 years or more. Built in 2001, Kenrock is one of the more established estates in Hout Bay. House prices have steadily increased over the past 10 years and in 2018 the median price of a home was R7.2 million. Most of the homeowners are more mature, between the ages of 50 and 64. But property data does show that 67% of recent buyers were younger, between the ages of 36 and 49, while a further third of recent buyers were in the first-time buyer age group of 18 to 35.

One of the Kenrock properties being marketed through Pam Golding Properties, for R9.495 million, is generously set on 3 300m2 of prime land near the top of the estate in Eagle Avenue. It has enviable sea and mountain views, and comes with an expansive garden, pool and elevated deck. The plans include permission to extend by a further 600m2 if desired. With its ample space, this is an ideal family home. It also allows for a home office, or guest accommodation, says Derek Preedy, Pam Golding Properties agent for the area. There are three reception areas, with floor to ceiling glass doors, and four bedrooms with private patios.

Klein Leeukoppie Estate, set next to the Sol Kerzner Estate, is also well-established and enjoys a prime location off Upper Victoria Avenue close to Llandudno. Pam Golding Properties agent Francis Sampson says homes here range from R4.9 million to R8.5 million. Avignon Security Estate, developed in 2006, comprises 26 hectares of land. This estate offers considerable value for money considering the size of the properties, says Pam Golding Properties agent Monique Dollenberg, with each home having at least 1 000m2 of land. Prices average at about R7 million. The careful landscaping of this estate, with its indigenous trees and lavender, affords it a pleasing “French Provincial” feel. Stoneybrooke Estate is a small equestrian estate set high up on Valley Road, with just 11 houses, some of which have horses stabled on their properties.

Another estate with a distinctive feel is Tierboskloof. It was formerly owned by a professor and entomologist, Dr Skaife, who stated in his will that his property was never to be subdivided, but left in perpetuity as a nature reserve. After much debate, it was agreed that that homes could be built on the land if they resembled the style and character of properties in Pilgrim’s Rest. Pam Golding Properties is marketing a four-bedroom home on the estate with spectacular sea views for R12.5 million. It is well-located on a level stand, and includes a tennis court with flood lights and a salt pool. Almost 70% of recent buyers were between the ages of 18 and 35, underlining its family appeal.

“Property data shows that the average value of homes sold in estates has remained consistent with previous years, despite the slowdown in price appreciation being seen across the region. Generally, estates are less affected by market fluctuations, which means that buying a home in one of these Hout Bay estates is a sound investment,” says Keys.

Many of the estates also offer opportunities for sustainable living, with borehole access and solar power panels among some of the green features.