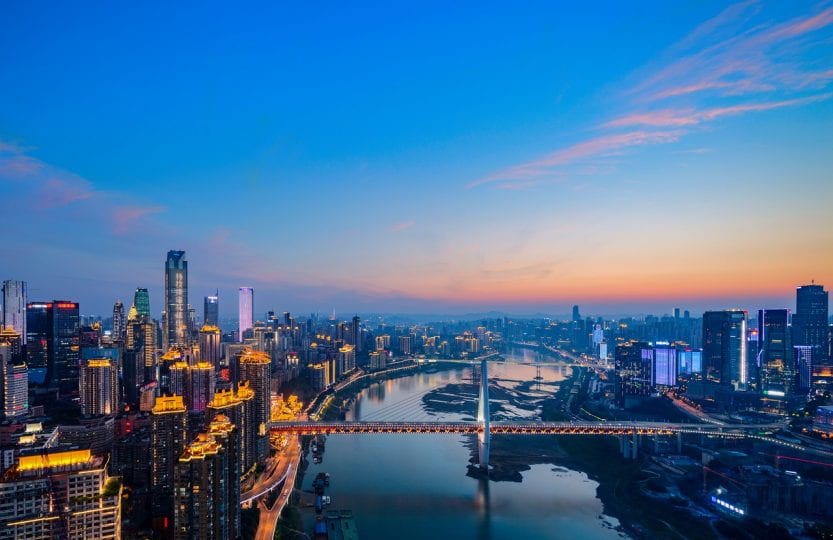 The highly anticipated Raffles City Chongqing complex in China is nearing completion. The $3.8 bilion megastructure, which consists of eight towers and a gigantic connecting skybridge – the so-called ‘horizontal skyscraper’ – measures a massive 1.12 million square metres. The 250m long skybridge is said to be the world’s highest and, when it opens, will include a viewing gallery sky gardens, an infinity pool and various restaurants. The complex includes a 230 000m² shopping mall, 1 400 residential apartments, a luxury hotel and 160 000m² of office space – allowing residents to live, work and play without returning to ground level. The complex is due to open later this year.

As architects search for more sustainable materials, an Italian company has constructed the world’s first biodegradable home. Gaia – a 30m² house was 3D-printed using natural materials such as soil and waste from rice production. The walls are created with vertical cavities inside, which are filled with rice husks for insulation – reducing the need for internal heating even in winter. The method of construction is time efficient and cheap, taking just 10 days to complete and the final product has almost no environmental impact. The company believes that agricultural waste could become a major building resource in the future.

Concrete named the “most destructive material” in the world

Concrete, like plastic, is a manmade material which has allowed for major advances in engineering and public health. But its benefits mask significant dangers to the planet and human health. After water, it is the most widely used substance on the planet and, like any good thing in excess, it can create more problems than it solves. If the cement industry were a country, it would be the third largest carbon dioxide emitter in the world. Its production consumes almost a tenth of the world’s industrial water use and, in cities, it adds to the heat-island effect by absorbing the warmth of the sun. Sand excavated for concrete production is causing the destruction of many of the world’s beaches and river courses. For hundreds of years, humanity has accepted these environment costs in return for the undoubted benefits of concrete. But now the balance appears to be shifting in the other direction.

If you are thinking about selling or buying something less extreme, or closer to home, we recommend contacting a Pam Golding Properties specialist in your area for accurate interpretation of information and professional advice.